ABi-Solar starts manufacturing polycristalline PV modules based on 4BB (4 bus bar) technology. Unlike previous models, the new ones, CL-P60250-D and CL-P72300-D, have four conductive buses in each cell instead of three PV panels. 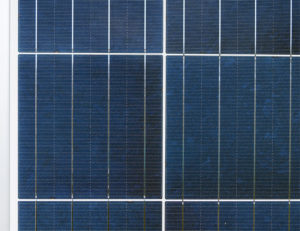 The 4BB technology provides extra potential to increase PV module power output and improve its performance characteristics. Due to reduced distance between conductive buses in 4BB cells the path that electrons pass through silicon becomes shorter. That decreases the dependence of power output on the temperature of a module. That means that a cell, when heated, will lose less power and generate more energy.

Due to greater number of busses of smaller size, the load on cell becomes lower, which reduces the chance of hotspots and microcracks on a cell. That ensures 15 per cent less max load on a cell as compared  to 3BB cells and 25 per cent less load as compared to 2BB cells.